Hi, i believe it would be great if/when the server capacity gets larger. A 30MB+ world size is probably the norm (considering the visuals and audio that most players appreciate). It is becoming very cumbersome and not enjoyable to constantly think how to keep the world size down, leading to silly solutions (e.g. breaking the worlds into parts, leading to export/imports etc.).
Please consider increasing the server capabity.
Thanks
With respect

So just to clarify a bit here, your Audio/Video/Images have nothing to do with World Size in the respect of things working well. The World Size and keeping a world slim is strictly referring to the World databases (not including World Compendium).

Please give this a read for some more clarity on the subject: World Size Check - #23 by libertyjack

In addition, having a slim set of World Databases is nothing to do with The Forge, but is a FoundryVTT limitation, wherein FoundryVTT starts to get unstable at a certain size of world databases.

(I’ve moved this conversation to its own thread)
As @aeristoka mentioned, the limitation has everything to do with keeping your games stable and usable and has nothing to do with server capacity.
If you (and every one of your players) have a machine with 64GB of RAM and you have 1Gbps fiber optic internet connections, then feel free to have everyone download a 500MB world every time you login, which ends up taking 30GB of your browser’s RAM. Also, be ready to wait a lot longer for the world to load because regardless of your internet speed, reading 500MB of database data from the file system and parsing the data is always going to take time.

Regardless, this is specifically about the world entities, even huge games shouldn’t use much more than 20MB or 30MB of data. Most games will average around 6MB from our calculations. If you need more than that, then that most likely means you’ve imported every single actor and scene and journal entry you could find in the world, and that is bound to be bad and inefficient.

thanks both for the reply. I appreciate the concern.
however, no, i have not imported every single actor/scene i could find…
i had to split my world into multiple sub-worlds to be able to play efficiently and my players to enjoy without enormous lags.
one of the sub-worlds has 33 actors (including every PC, NPC and monster), 4 scenes (one landing scene, one scene for resting and two scenes for action).
databases for items and spells are reasonable; circa 200 items and 200 spells.
I have to keep the chat and fog db files clear (export-delete entries-re-import/overwrite) to be able to retain the overall world size below 16MB.
Currently, before the next session, with all FoW clear, the world size is 15MB and feel stressed that the game will be crushing when new FoW / chat starts populating in the next session.
How can we enjoy without the fear of crushing?

It would be good to know what is actually taking up space in your world.
200 items and spells probably doesn’t add 10MB on their own.

Perhaps you have Journals where you dragged an image into it, causing the entire image to be loaded as base64 within the journal note itself?

Either way, fog is automatically cleaned up and optimized by Foundry itself as much as possible, you shouldn’t need to worry about it outside of weird behavior where a module has filled the file with 500mb of gibberish.

Either way, 15MB should be fine still and shouldn’t be a concern for you.

for one of the sub-worlds, my data folder content is here:

the scenes folder is empty
and this is only 4 scenes of the entire world of the campaign
i have spilt the world into 4 sub-worlds to be able to run reasonably smooth.
but this way i am restricted in a more “confined” and linear plot.
if the players decide that they should visit an area that is not in the running sub-world, then i have to export their PCs, load the other sub-world that contains the scene they want to visit, import their PCs, and goes on. that, to me seems fun-breaking, and it is indeed.
the entire world is 36 scenes (yes, it is a long campaign that we started playing in person tabletop and has evolved… approximately 20 sessions so far).
and, yes, with 15MB sub-world size, we all still have problems; e.g. browser memory crashes, lags when players move or dice rolled, loading from one scene to the other, etc. the problems start some time after we all join and start playing. I have noticed that the sub-world size increase dynamically, but not because of the fog/chat db only. the scenes / actors file size increase too. I then need to stop the game - export the world - delete the long size-breaking entries in scenes and actors manually - re-import/overwrite the sub-world - and restart the game. that is hugely cumbersome and spoils the fun… asking the players to have a 10mins break every hour or so.

At this point with your world that slim, that sounds a lot more like Module issues. Give this FAQ a read: Trouble with Modules

I can say pretty definitively that your world database size increases happened locally too. FoundryVTT uses “NEDB”, which writes new things to the end of the database, and compacts later, so the Database files will always increase when you’re actively playing, then be compacted at some point.

This is not a Forge-related thing. Forge doesn’t cause FoundryVTT to flake out and crash.

One further suggestion, check your Audio Settings for audio files in playlists. Do you have “Large File Streaming” un-checked? Are you using very large audio files? What FoundryVTT version are you on?

The crashes you describe sound like the Audio Behavior that started with FoundryVTT 0.7.3, when the audio stack was switched. With the native Audio loading, it has to load an decompress the ENTIRE audio file in RAM, which definitely can crash a browser. Go through ALL your audio files and tick “Large Audio File Streaming”.

it is possible the world size increased locally but tbh i was not reviewing it as frequently as am now.

Regarding audio: i deliberately have removed ALL audio from all scenes - both scene sounds and music playlists. my campaign is totally sound/music-less … which is also a compromise on the overall fun experience.

So, it seems i’m back to square one after this discussion. and the only solution to a large/long campaign is to split the world into parts AKA adventures, instead, but this way the flow of the plot gets more “predefined” and linear unfortunately.

I really don’t know what to tell you at this point. I run my weekly game with ~60 Modules, 35 MB world size, and tons of audio on The Forge with absolutely no issues at all.

Then it’s a module or Foundry itself in some edge case.

thanks!
the only reason i can think of is perhaps because i imported the world to the forge from my local storage and perhaps something went wrong there initially and i didint notice…
i have noticed that scenes i create from scratch directly on the forge have less file size than scenes that have been imported.
It is not a module issue; i have interrogated every single module i have active and kept only the “healthy” ones.

Imported scenes will be slightly larger as the thumbnail image is part of the scene data itself. That explains the larger size there. From your screenshot, your world is basically around 6-7MB, as the packs folder is for compendiums and doesn’t really count as only the content in the data folder will be sent to the user’s on load.
As for growing file sizes, see the FAQ item here : General FAQ & help

So for the scenes/actors file size to increase, it’s normal, it will go back down after a few operations happen or the next time you restart the server. The real worry is when it keeps growing exponentially. I don’t think you have to worry. The real issue is when some people have 500MB or even 1GB of data in their world (yes, I’ve seen that too often unfortunately, due to some modules spewing corrupted data in their database files), or if you have a very large number of entities (I’ve seen some with 200 scenes, 2000 actors, 10000 items) and end up with a 60MB actors.db for example. You’re at 5MB, so you’re totally fine.

Now the real question is, other than your worry and keeping an eye on the world scene, do you have any actual issues that you need fixed? You mentioned lags, so perhaps the issue worth looking into is why you have lag problems, rather than focusing on the world size, because I don’t think that’s your problem.

thanks for the detailed reply!
i had concluded that the lags and scene loading issues were related to the (dynamically) increasing world size. i now doubt, as you do too, that the world size is linked to the problems we experience.
module issues is also very unlikely as i have the bear minimum (perhaps now i could consider re-adding the action animations-related one i like).
the team connects through the eu server and our locations are Dublin, Belfast and Athens.
every session, after 15-20 mins we all connect and start an encounter (6 players and one GM) experience two major issues:

Please make sure EVERY audio file you are playing has this option checked:

Please also post a full Module list that you are using here (You can get a text list via the TidyUI module, screenshot will also work).

here is two screenshots of my active modules: 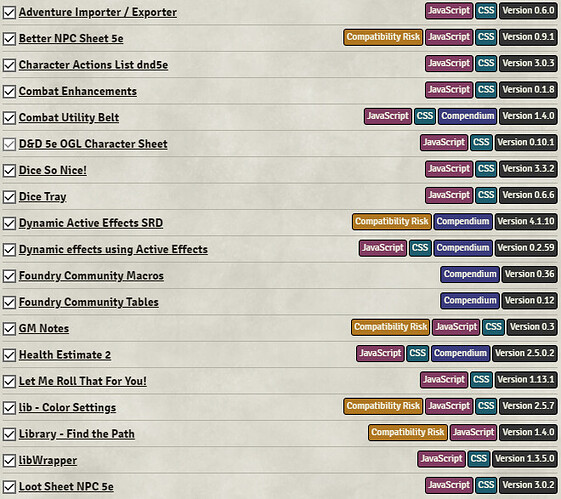 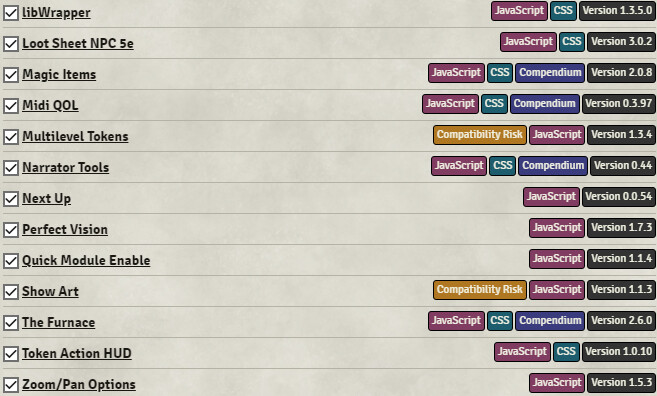 i have disabled ALL sounds/music audio from my campaign

Magic Items has caused considerable issues in the past, try disabling that one.

Other than that, open up your Dev Console when you’re having issues (Press F12, click the Console Tab). Look for errors in Red Text, and post those.

ok, cool. i’ll disable magic items.
regarding taking screenshot of the dev console, i will put a reminder to do so when we all connect and play again - likely on Saturday.
Cheers

…actually, F12 to bring up the dev console is not working while i have the game running on the forge. is there any other way to open the dev console? i am using opera gx