ALL THESE MODS ARE OLD AND DUMB. See my new post here:

— UPDATED June 19, 2022— See old thread Hi, It’s me again. New year, new modules. Here’s the list and I’ll keep the same organization I did in my old thread. Please note that there is such as thing as TOO much of a good thing. If you’ve got 80 modules running at the same time, you’re going to have a bad time. Some modules have dependencies. The Forge and Foundry should automatically download/enable them for you, so I haven’t listed them. Just know that if you get a popup about dependencies, … 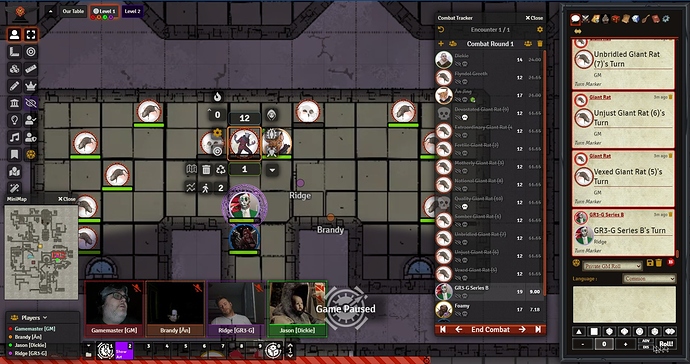 I’ve gotten some questions about what Mods I use on the discord, so I thought I’d make a quick post summarizing what I use and why here on the forums. It’s a lot. I feel like my Foundry is more Mod than Core at this point.

If I had to pick 5 modules to bring with me to a desert island, these are the ones I'd install. And also, I'd take 6.

OPTIONAL BUT RESOURCE INTENSIVE! USE WITH CAUTION!

I run pre-made adventures from D&D Beyond and require my players to create their characters there. I’ve got the legendary bundle and a Master Tier subscription, so I share all my resources with them.
I do some light graphic design for some portraits, tokens, tiles, and other random stuff using Google Slides. Set the background to transparent and download the slide as a PNG.
The map is made in Dungeondraft using an overlay of the original Dungeon of the Mad Mage maps. I’m working on level 2 currently and actually plan to split up the map so it doesn’t look quite so pixelated when I blow it up.

Do you also use MESS’s more streamlined rolling/targetting for D&D 5E (the one that creates custom cards in chat for each target? It’s nifty, but I can’t get it to roll Dice So Nice’s 3D dice.

I just end up disabling the streamlined rolls…

Yeah, I don’t use a lot of the enhanced roll functionality within Foundry. All of my rolls come from beyond20. Very occasionally, I’ll do like a straight d20 or d100 using the dice tray mod. I do treasure rolls off of there for loot.

How do you get MESS’s

All the addon modules I discussed are linked above.
The master list of ALL modules can be found on Foundry’s site. You can also find them in the module browser from within Foundry VTT.
https://foundryvtt.com/packages/modules
The M.E.S.S. module is on this page.
https://foundryvtt.com/packages/mess/
Click through the links on that page to find more info on the module, how to install, and how to use it.

I’m sorry. Please ignore that last post. I started typing on my mobile and then finished on my pc. It’s supposed to ne my earlier question about the 3d dice and MESS.

(also, conditions tracking does require the installation of the module)

Nice list, feels good to catch up on all the useful modules out there, and there’s a lot I never heard of! I’m so out of touch now since I entered my code cave.

Great list! I see you are using VTTA Iconizer with the WoW icons. Where did you put those icons in the Forge and how did you tell VTTA Iconizer to look for them there? The Iconizer documentation says to put the icon in User Data but I can’t figure out how to add a folder to User Data on the Forge.

I don’t use custom icons. I use WoW ones. I’ll have to do some research. It’s been a hot minute since I’ve run any D&D on Forge as I’ve got some work craziness I’ve been dealing with.
I’ll do some updates and look into it and get back. Or someone else can jump in and give your tips on effectively using iconizer.

A little follow-up on VTTA: due to recent changes made to VTTA by its creator (Sebastian), I was experiencing more and more bugs and having increasing difficulty using D&D Beyond with FVTT.
(As proof of this, the VTTA D&D Beyond Integration given in this post is broken…)

Then I discovered D&D Beyond Importer by MrPrimate (thanks to Matt @encounterlibrary) and it now works like a charm!

NB: all useful links (including an excellent module overview by @encounterlibrary) can be found on the module page.

Edit : just read this post from @kakaroto announcing that The Forge will soon provide a D&DB integration service of its own, which will be available to his patrons…War is raging between FVTT developers!

Oh yeah, this post was last updated in August 2020… when the list of modules was in the low hundreds and VTTA was still usable!
I don’t know the status of the VTTA modules, just that Sebastian has disappeared again and maybe his modules still work or maybe they don’t. Most people I believe have moved on to MrPrimate’s now which is doing a very good job.

There isn’t war raging between FVTT developers though! MrPrimate and I are in contact with each other and we want to collaborate on the D&D Beyond integration so that everybody wins. We work on different solutions that work differently and would fit the needs of different people, but we both want the same thing and if we can avoid duplication of efforts, we’ll do it, so it’s a collaboration, not a war!

I just moved my hosting to the forge so don’t need some of these, but I would love to see a current list of modules you use and their settings. I really like FX master and the related plubins.

I’m also trying to automate everything I can, from rolling saving throws to rolling damage dice at the same time as attack rolls.

And spell effects and conditions.

I’ve set some conditions triggers with combat utility belt, but it seems to me that someone would have already created a library of common things that trigger conditions like spells etc. And would cause the conditions to actually do something, like make blind characters site disappear.