Game Data doubled in one session of play

My game data went up from 23 to 46ish in a 5 hour session. Play was a bit buggy as well, with deselection of tokens a bit haphazard, latency lagging, and a few other small things.

I’m extra cautious about game data now having experienced issues before and even create a separate world for each adventure using shared compendiums across worlds.

What could have happened?

There is a lot of different reasons this could happen.

What I would recommend is disabling modules and clearing your chat-log to see if it helps.
What could make the jump is “malicious” modules who are giving problems.
One of these is for example Chat-image modules, who makes the chat fill with images and space that lag the server. There is other examples of it where they create errors that spam your world full with them.

You should be able to see what worlds are getting bumped by going to “My Foundry” -> Select Data Content to delete. This should help you determine which worlds the problem might be in. A normal world shouldn’t be much more than 20MB.

thanks for the reply. Here are a list of modules currently installed. I’ll try turning them all off and seeing how that goes. I clear the chat-log pretty regularly. Any tips on getting the data down again? 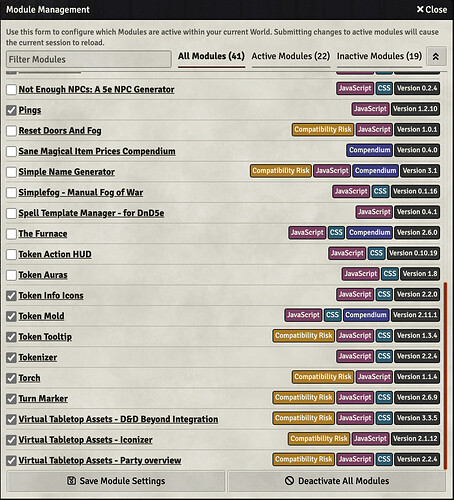 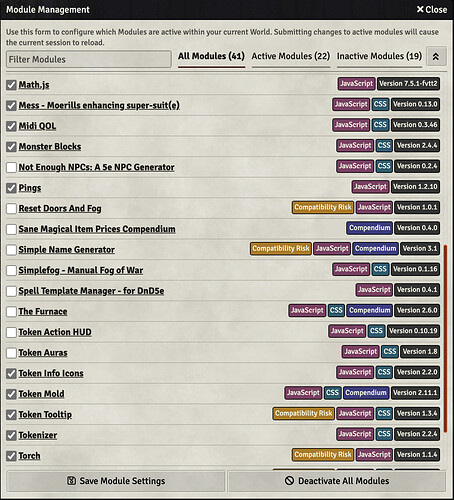 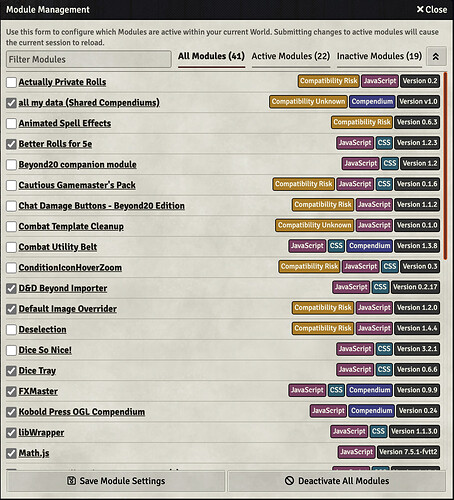 You should be able to see what worlds are getting bumped by going to “My Foundry” -> Select Data Content to delete . This should help you determine which worlds the problem might be in. A normal world shouldn’t be much more than 20MB.
@Kevin

So by doing this you can see which world is bumped and if you have any “Other” that is error logs, I would recommend deleting those.

Great. I’ll delete these ones, but that doesn’t seem a huge amount.

The world data for the world in question has gone down to 33 or so which is significantly better (but that was before I deactivated the modules). Should I actually uninstall all modules as well? 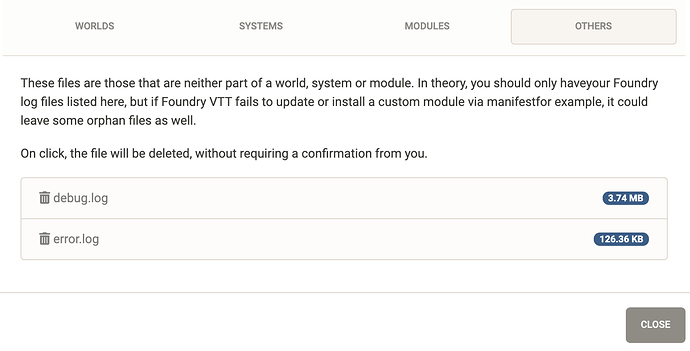 Had another 2 hour session last night and the game data jumped from 33 to 44.90MB. At the moment, “The Titan’s Children” world has only 7 modules activated, my barebones (though I could probably do without Monster Blocks).

Both the worlds in the screenshot were under 10MB a couple of months ago (we usually play fortnightly).

Clearly I’m heading for a another overload pretty soon.

From the FAQ, worth noting :

It might be worth launching the world, stopping it, launching it again, then stopping it, wait a couple of minutes then checking the size again, see if it remained at that 44MB or if it dropped back to the 33MB you were expecting.

The size for both worlds was under 10MB a couple of months ago. Apart from some additional actors and some extra scenes, not much has changed.

“The Titan’s Children” world was about 23MB on Saturday afternoon, then I had a 5 hour session and it went up to about 44MB. That’s when I sent the original message. After that, it dropped back to 33MB. We had a 2 hours session on Monday night and it leaped up to 44MB, and now it’s back to 33MB. To be clear, I’d be expecting it to be under 20MB at most. The upward jumps are going to hit a critical point pretty soon.

“The Mansion of The Mist Monkey” is a new world I created yesterday, has 5 detailed maps with dynamic lighting in it, and gives me a pretty good comparison.
“The Titan’s Children” and “The Wrecking Crew” are both on a upward trajectory.

Thanks for the help!

Export the world and look in the data folder to see which of the .db files are growing, that might be an indicator as to what’s growing abnormally. If you find a large file (actors.db would be my guess), then open it in a text editor and scroll through it to see if there’s some large repeating text. That might be an indicator of a module causing the world data to inflate.
I didn’t see anything in your module list that jumped out at me as “this is a bad module”. I know better rolls had issues, but I believe those were fixed in an update a couple of months ago (are all your modules up to date by the way?).

Thanks, that’s a good idea.

WORLD: THE TITAN’S CHILDREN
I’ve highlighted anything over 5MB.
The journal.db file is interesting at 10.3MB as I don’t use journals. Does that look normal to you? How can I put a lid on it?
The actor.db file looks reasonable at 6.1MB 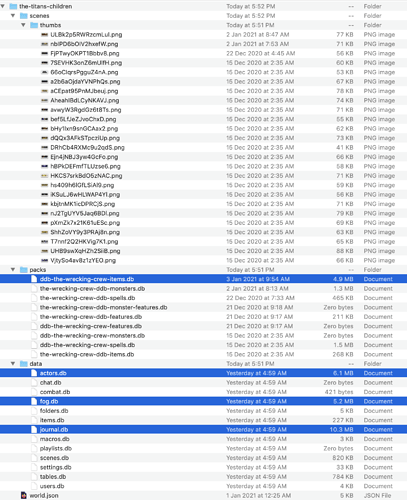 WORLD: THE WRECKING CREW
This seems pretty reasonable, but I’m worried about it growing as it was under 10MB a short while ago. The journal.db file is an interesting comparison with the other world! 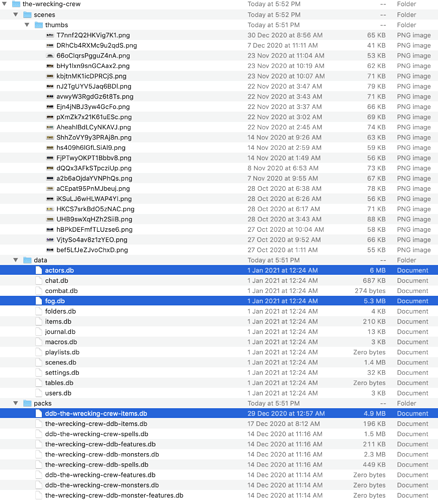 I’ve had a look at the journal.db file in “The Titan’s Children” and it hurts my brain…

It seems to me that the first part of it features a good deal of recognizable English, and then it breaks out into some code stuff which runs for the bulk of the text file, but at the end it returens to the English.

Here’s a screen shot of the first part, you can see where the text suddently changes towards the end. 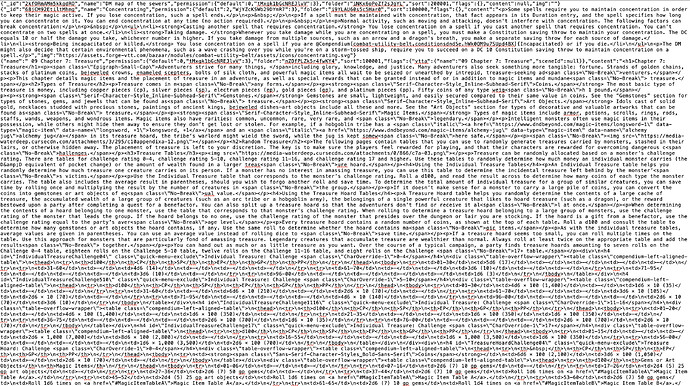 And this second screen shot is at the end of the text file, and again you see the transition from the incomprehenisble (to me) to recognizable English. The bulk of what’s sandwiched in between these two recognizable parts is probably about 97% of the text. 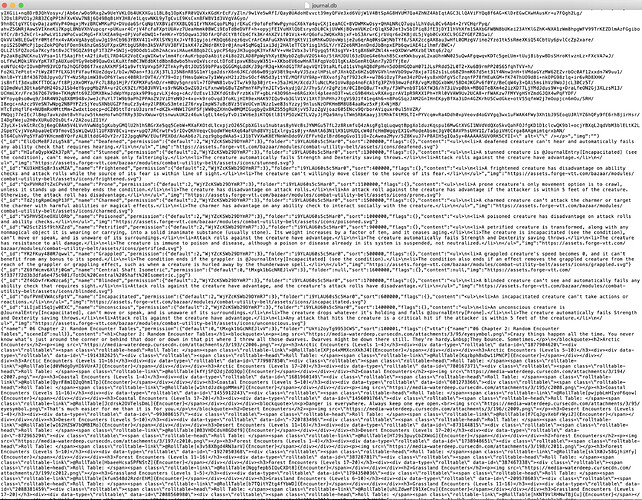 The journal being 10MB, it sounds like you basically have a 10MB image pasted inside the journal. The text I see in that first screenshot is correct and normal, at the bottom of it, that’s just an html table. It’s all good. The problem is in the top portion of that second screenshot, where you can just see a long chain of seemingly random characters. That’s an embedded image.
I believe there’s a module that causes this, I can’t remember the name, but I believe there’s one that allows you to “paste images into the journal/chat” and it causes this. I thought they fixed it so it doesn’t do this anymore because it was causing issues to everyone (slowing down load times among other things). Try to find embedded images in the text of some journal entries, and remove those, see if that helps.

That seems to have helped a lot. Thanks. The data in The Titan’s Children is now at 24MB which is a lot better!

Oddly enough, The Wrecking Crew had the same image in the journal, which I have deleted in both worlds, and there was no big change there.

Can I get this data down further? Below 20MB?

I’m trying to do the following:

Oddly enough, The Wrecking Crew had the same image in the journal, which I have deleted in both worlds, and there was no big change there.

Probably just needs that database to get compacted again before you see the size drop.
I also forgot to mention. I noticed you have a ddb pack in each of the worlds, I assume it’s the same content in both worlds, I’d suggest you import your content into a shared compendium instead, so it’s a single compendium available in both worlds. See How to share content between worlds