A few more bugs that are only on Forge

I’ve had intermittent problems with Foundry before. And I spent a lot of time figuring out the sources of the problems. Many of these problems did not appear if I ran Foundry from my computer. For example, the Minimal UI module works fine on my computer, but with the same world settings, it doesn’t work on Forge.

Screenshot_2232×696 22.9 KB
There are also examples of modules that stopped working on Forge, but in the same world and with the same nitros work without problems on my computer

Did you update your modules, and then restart the server entirely? By that, I mean clicking stop server, and then start server at forge-vtt.com/setup.

Hi @bvladimir168,
I’ve checked your account and what I can see is that you have the Game Manager enabled, with it still being set to Foundry 0.8.9 while you’ve manually overridden some of your individual worlds to run on Foundry v9.
Your symptoms are very likely to be a direct result of that configuration.
See the warning that appear if you override the Foundry version :

image2389×152 21.3 KB
If you go to the Game Manager tab in your configuration page, you’ll also see a similar warning there.

image1575×195 27.7 KB
Also see the “Update to Version 9” button that you’d need to press to confirm that you want to update your version to version 9, as you’re on the ‘recommended’ version but you need to manually confirm the upgrade.
If you go to the Bazaar, always check on the left hand side, as it will tell you which package versions are listed for you : 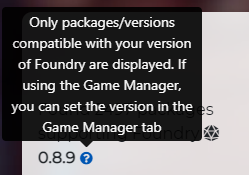 This means that you will not see any version of any package that is v9 compatible only, so as you are running your game overridden to be on version 9, that would definitely explain the issues you’re having.

Once you’ve set it to use version 9 from the game manager tab, go back to the Bazaar page and do a full update of all the packages (it will detect new updates available), and that should fix all of the issues you’re seeing.
I would also recommend you set all your games to remain on ‘default’ so they follow the version set in the game manager tab, and only use the override temporarily in order to test something specific for example.

When comparing the behavior from the Forge and your local installation, on top of checking the Foundry version, it’s also a good idea to compare the versions of the modules that are installed, as that can make a big difference in the experience.

I hope this helps, and let us know if you still have problems or need help with anything else.
Thanks!

Many thanks. This helped me a lot.
Haven’t had a chance to test the game yet, but I hope this solves all the problems.