UI will not Load

For the past few weeks my browser has been loading the games very slowly. The webpage itself finishes loading very quickly, but then stays on the screen shown in the attached image. I have tried every browser I can think of (Edge, Firefox, Chrome, Opera) and have had no success with any of these. As someone who knows nothing about web coding, this has been very frustrating, and I’ve considered just leaving my campaigns because of these issues I’ve been having. I have hardware acceleration on, and from what I can tell OpenGL 2.0 is also activated. Looking at about:gpu says that some problems stem from having an AMD graphics card, and if that’s the case, how do I implement the recommended workarounds? Starting to get very annoyed with this, as it worked perfectly up until a few weeks ago. 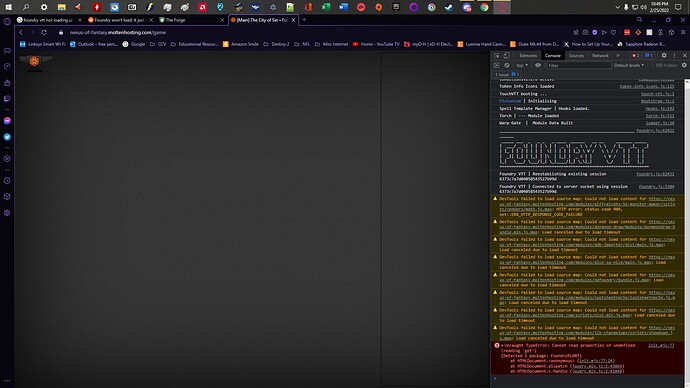 An oversized world will typically manifest as FoundryVTT having a very slow initial load-in, or failing to load at all. A good rule of thumb for world sizes is: Normal: <= 10 MB Large: 10-20 MB Huge: 20-40 MB Typically you’ll start to see trouble around the 30+ MB mark. This is around the fact that FoundryVTT sends the world databases (that comprise that size) to every player on load. This will hurt players/users with slow internet connections the most. How do you check World Sizes on The …

Hi there, I have a similar issue, where the world sometimes doesn’t load correctly. Or in other cases tokens aren’t moving properly (2/3 of a tile instead of x tiles), then later jump to their final spot.

I’ve gone through the guide to check world size, and my world size excluding Packs is only 6.x MB, so assume that shouldn’t be the issue.
I don’t appear to have any clashing modules either.