I have a world that I haven’t opened in a few months (Pathfinder 2e). When I tried to load it a few days ago, it appears the server starts and it takes me to the splash screen, but I never get the pop up window to select a player/GM account (I have Automatic User Management off). The “Disable Modules” button does not change the behavior. If I turn Automatic User Management on, this is the console in Chrome: 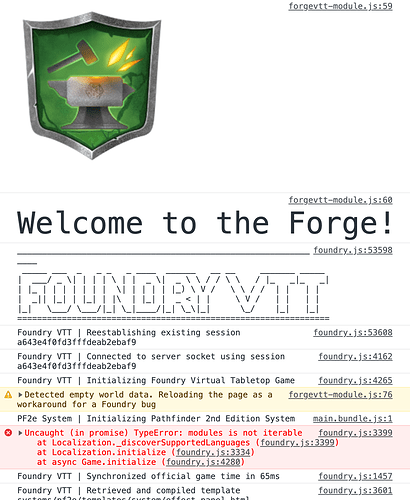 image1098×1336 323 KB
It then goes into an endless loading loop. I have other PF2e worlds installed that are working fine. I have tried exporting the world, reimporting with no change. I posted in Forge Discord, but only one user responded (with the export/reimport) suggestion. Help?
kakaroto September 16, 2021, 1:37am #2

If you’re on Foundry 0.8.9, I would recommend you downgrade back to 0.8.8 because I know there is a bug in 0.8.9 that can cause that behavior. We’ve seen it mostly on pf2e games that had been converted from Roll20, but it could be on any game system in which an item was imported from a compendium that was meant for a different system.
I hope that helps.

Thanks for the reply. I actually tried that before and I get an error in The Forge “Cannot Access Foundry’s Setup Page” as a red banner at the top of the page. Any thoughts?

I will add that I get that error on all of my PF2e worlds if I downgrade to 0.8.8, but not other game systems, so I think its a PF2e thing. I’m thinking of installing 0.8.8 on a home Foundry install, installing an older version of PF2e, then exporting the world and trying to import it locally under those conditions. Does that seem like a reasonable course of action?

Exporting the world to local Foundry instance at 0.8.8, opening world, deleting content from Roll20 converter and reimporting world to the Forge fixed the issue.