Why Does The Game System Count Against Storage?

Just signed up for The Forge to test it as an alternative to self hosting in my own AWS environment. I was a bit disheartened to discover 12% of of my game data quota was instantly consumed by simply installing a game system. It was my understanding that the quota only counted for content that I added to the platform (Journal entries, assets not included in the bazaar etc.).

My biggest concern now is that I’m going to quickly fill up my storage and end up being nickel and dimed for “extras” on my account, at which point I’m better off continuing to self host in AWS. My AWS free tier is coming to end next month but with AWS LightSail I can get a fully operational Linux Server with a 20GB SSD for $3.50 a month.

What is everyone’s experience with this? I’d like to try out a few other game systems in the future but I feel locked in to a single system because of the impact the game system has on the already very low data quota’s.

In this location there are 4 tabs that you can look through to see what is eating your Game Data.

In example, DnD5e is using only this in my case:

Please post your own screenshots, as your experience seems out of kilter with what normally happens in Game Data.

And the reason the gamesystem uses anything at all is due to the compendiums - in order for Foundry to be able read it and you to manipulate the contents within, it needs to be in a location over which you have control. Thus any module or system that has compendiums will need the data part to be located in you Game Data.
But any of the assets and other files are offloaded to the Bazaar.

I’ve added nothing to this. I just installed the game system, don’t even have a world created yet.

Pathfinder has very large compendiums, this is to be expected.

You can request the creators of the game system to move the monsters to a separate module and not include them in the system itself, but you would most likely want to use them anyway, so there would be no difference.

I don’t believe Foundy could work properly if the compendiums were fully hosted through the bazaar, it needs them to be writable and that can only happen if they’re copied to your Game Data.

Alarich is right on, both Pathfinder editions are MASSIVE with Compendiums, and there’s really nothing we can do about that.

The Nice part is that that one Game System will work for ALL your Pathfinder games, so that’s a “one time” usage of your Game Data.

Hi!
Note that the system is about 95MB if I remember correctly, and 63MB of those are in the compendiums. which is why you see it at 63MB in size. Similarly, the dnd5e system is a little over 100MB, but only counts as 7MB because the compendiums are much smaller, and WFRPG is 50MB but only 100KB counts in your data as it has a very small compendium.
The issue is that the compendiums have to be copied to your data for Foundry to be able to access them (even if you don’t make modifications to them), which is why it counts that way.
PF1 is even worse, with 137MB total, but most other systems don’t use that much, see my list of installed systems below (most are in the Kilobytes range, not Megabytes): 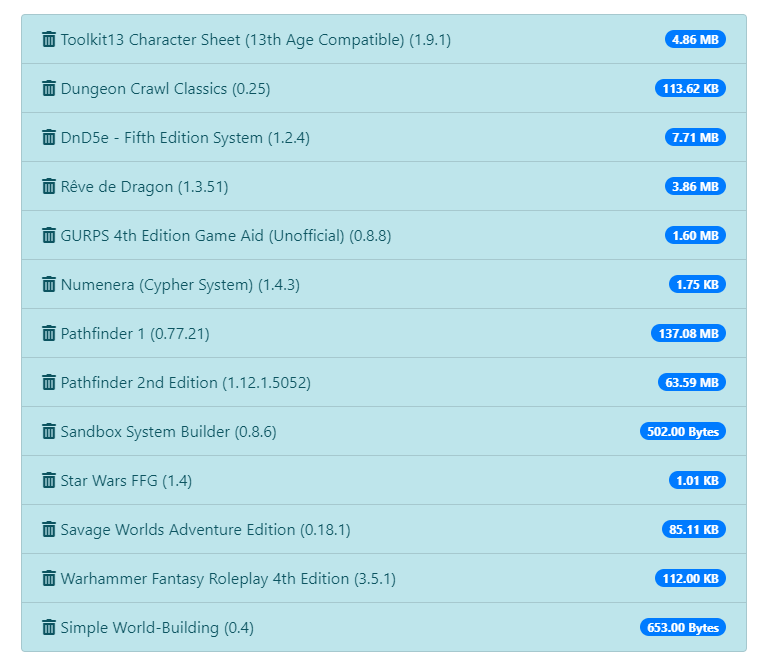 Similarly, the game audio bundles for example are only taking 200 KB even though each one comes with about 1GB of music content in it.

In the end, you would expect to never really go much beyond 200MB for multiple systems and modules installed, or even 10MB if you’re not a pf1+pf2 player

That still leaves you with 300MB for your worlds, which should be enough for 10 massive worlds, or 50 regular sized ones. Like Aeristoka said, the system is a one time usage of your Game Data, after that, you shouldn’t see it jumping up so dramatically.

If you really need a lot more (assuming a ton of custom modules, and lots of huge worlds, etc…) then I think you’d fall in the heavy user category and a story teller subscription would be more than justified at that point, but still, I don’t want people to upgrade to story teller if they’re not interested in its unique features, which is why I have added the system of extras. With a game master tier + extra data for a year, that’s 59.98$/year, so about 5$ per month, which is still a very reasonable and competitive price.

You will of course always have a better storage/price ratio if you go with self hosting, but you won’t get the convenience of the Forge and our many improvements and unique user experience. That’s what I sell, the convenience and user experience, not the storage itself (With the data being replicated up to 9 times against hardware failure and across regions + daily backups kept for 3 months, it can cost me about the same amount I charge for the extras, so this is just the reality of the costs, it’s not about nickel and diming the customer).

I hope that helps clarify it and makes you a bit more confident about your expected data usage. If not, let us know!

Thanks for that overview! All the modules I use only took up an additional 1% of the game data. I also just imported 4 of the 6 adventure path books for Age of Ashes and it only took up 1% of the asset storage. I was expecting a way bigger impact.