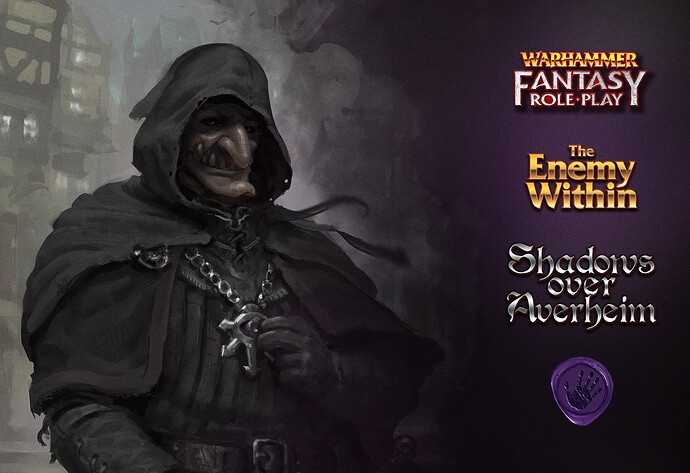 The Old World is dying, but nowhere does the stink of rot permeate the air more than in Averheim, a city festering beneath a dark cloud of shadow.

Its lord, Elector Count Marius Leitdorf died at the Third Battle of Blackfire Pass, spilling his lifeblood to stop the greenskin hordes from razing Averland’s fertile lands. Now the nobles of Averland vie to replace the Mad Count. While the good and great are distracted as they play their power games a new crime lord is making his presence felt in the bustling dockside of the city. 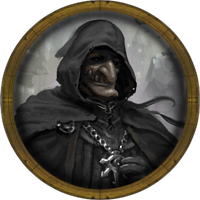 In the meantime a group of well meaning citizens begin looking into a rash of disappearances within the city, little knowing that they are about to become caught up in events that could eventually shake the Empire to its very foundation.

Warhammer Fantasy Roleplay (WFRP) is a British Fantasy Roleplay game originally made by Games Workshop and now published in its 4th Edition by Cubicle 7. In most fantasy RPG games you play an epic and noble adventurer. In WFRP you start as an ordinary person - sometimes with a randomly chosen and you advance from there. As the End Times approach ever nearer, the Empire needs heroes like never before! Generate your own character and see them go from humble beginnings to hero!

Shadows over Averheim? Are you lost? Don't you mean Bogenhafen?

The Enemy Within is a classic WFRP campaign... Wait - there's two of them! The first one, with Shadows over Bogenhafen and Death on the Reik is currently in print! 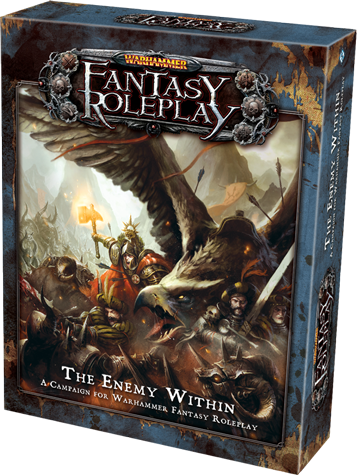 This second one is the one, we’ll be playing also bears the name the name Enemy Within. and was published by Fantasy Flight Games circa 2013 for WFRP 3rd Edition. It’s an original standalone campaign that is set 8 years after the original. You do not need to have played the original to enjoy this adventure and it does not spoil the original for you! We will be running it in the far superior 4th Edition.

What do I Get?
All maps, handouts, arts, tokens and character creation materials will be made available to you. You don’t even need the rulebook to play.

What Character Can I Play?
You’ll start as a 1st level/career character. Foundry has an excellent character generation routine, automating a lot of the page-flipping. Prior to the first session we will arrange a short 30 minute slot to generate your character and pick a background to provide you with a hook into the first session.

Pay to Play?
Sadly online game require a high amount of effort to setup and yet have a high non-attendance rate. As this is a paid game, it will be of high quality with sound, music, Syrinscape and if needed I’ll even throw in a kitchen sink. (Please don’t make me rip my sink out the wall).

This game will require payment to the Game Master at a rate of £11 per session or $15.

Still here? Drop me a line then if you want to play. My Discord is skunner#7598 or leave a message here.