Hello folks,
I have been using forge for about 2 months now, overall great experiences. In 6.5 we had very little issue with using in game video/voice.

As of 7.5 update, we are having substantial issues with players unable to see/hear each other additional we are continually having to press F5 to refresh our page. I have paired down my modules to minimum in the hopes this will correct the issue.

Has anyone else been expiercing a similar issue? Unsure how to diagnose. So far I have removed all “potential conflict” modules and checked console for any errors in some solo testing, to which there are only a handful of minor.

do things such as world size or other things I am unaware of have an impact on this sort of thing?
The experience the last 3 weeks has been brutal, to the point of thinking of going back to self hosting and just using discord for voice/video. I would like to try anything to avoid that. Unfortunately it is hard to “test” the live style play session solo.

The real advantage of the foundry voice/video is the quality, it really is fantastic when working proper.

I am hopeful this is all I need to do but any feedback would be greatly appreciated! Thanks!!

I’m unsure about your issues, and what may have changed to cause it. I know that 0.7.5 has introduced a few changes to the Audio/Video conferencing features but I was under the impression that it was stable and improved things rather than causing the issues you mentioned.

The most likely candidate in your case is a long standing bug in Foundry which can cause audio/video not to be sent even after the connection is established between two players. Self hosting has the same issue, and actually, wouldn’t solve anything since audio/video is entirely peer to peer and doesn’t involve the Forge servers (unless in rare cases where peer to peer connectivity is impossible to achieve, but since you say reloading fixes it, it’s not an issue of being unable to connect to each other).

AA lot of those who have had similar experiences have switched to using Jitsi for their audio/video, as it isn’t plagued by the same bug and it also has the advantages of using less bandwidth and CPU, making the visible quality of the videos better. It’s easy to use, as you simply need to enable the jitsirtc module, no configuration would be required.

If you’re interested in the more technical details, I’ve written up about it before in this post :

I received this question recently by email and thought that my answer deserved to be copied here as well for others who might benefit from it. The question was about how Foundry’s Audio/Video conferencing compares to Discord’s, and with Discord Nitro. As well as whether hosting through The Forge would give any better results than self hosting. (Edit: When I talk here about Discord, the same applies to Jitsi in that case as they work similarly) First, when it comes to the difference between sel…

I hope that helps.

Thank you very much, I appreciate your feedback. I will give Jitsi a try. Hopeful that fixes most if not all of our problems!

getting this error spammed in the console, anyone have an Idea what is causing this from 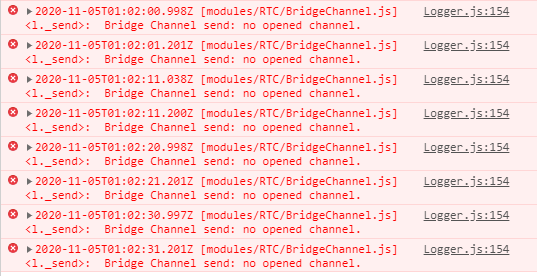 That seems to be coming from the jitsirtc module. I haven’t seen that error myself and not sure what it means. Is it just spamming the console or causing issues ?
Honestly, I don’t know what to make of it, found some threads online about it. I’ll poke the jitsi developer, maybe he has some insight.

for clarification here, I was able to get the error to go away by doing the following. Now video and voice is uninterrupted as on first activation we were having stuttering with jitsi.

I had to go into the game setting and change the signaling server to custom. I left it blank, it gave me a bunch of unable to connect errors.

I then switched back to “foundry VTT” as the signaling server. No more console error and no more interruptions.

Just incase this issue comes up in the future. Not sure how that helped but it absolutely fixed the issue.

Thanks for that feedback.
I’ve asked the developer about that and he answered me with this :

@KaKaRoTo Yeah, there’s a ticket open for that here: https://github.com/luvolondon/fvtt-module-jitsiwebrtc/issues/36. The issue comes from the fact that the beta jitsi meet server that we use seems to have stopped accepting BOSH datachannels and now needs to use websocket, which we don’t yet support. I’ve got a change that Luvolondon and I have been working on that should resolve it soon.

So, it seems to be an issue that will be resolved soon by the module directly

One more answer from the dev, after I told him about how you got it fixed, he said that it was probably a fluke because he had done that himself a few times with no results. He also said that he just made an update a few minutes ago which should include the correct fix, so please make sure you update your jitsirtc module and hopefully you won’t have any more issues.