Rime of the Frostmaiden and the Crystal Shards -- CAMPAIGN BEGINS!

Brief Description of the game: All levels of experience welcome. I run a version of Icewind Dale I’ve been building and playtesting for the past year, one utilizing many upgraded maps from various Patreons to which I subscribe and employing several custom playlists you won’t hear on anyone else’s VTT. Play runs through my Foundry account for a super slick, super intuitive experience. My version strays far from the official module’s plot structure while amplifying the struggle to survive in a land teetering on the edge of cosmic apocalypse; a version influenced in equal parts by the barbarian apologia of Robert E. Howard, by the unparalleled way Jack London described survival in a polar environment, and by the seminal works of R. A. Salvatore, the man without whom that brutal corner of Faerûn would not even exist. 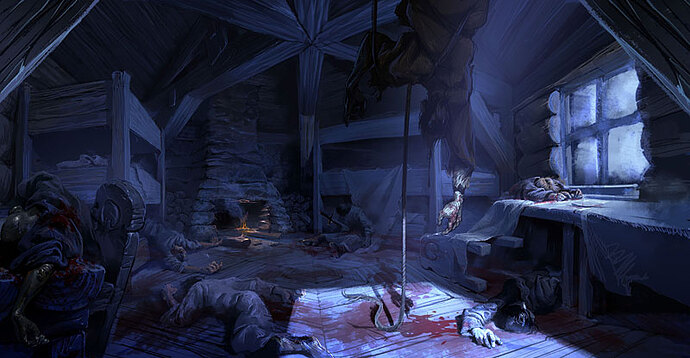 Murder Scene800×416 75.1 KB
This tale starts at crime scene, not a tavern. You’ve come to this charnel house because Pericolo Topolino, the council speaker for Bryn Shander, has asked for your help. Each of you has been vouched for by an old friend Pericolo trusts, someone who knows you and your deeds even though you know him not. Pericolo needs your help catching a serial killer. Three months ago, people started disappearing from Bryn Shander. The disappearances were always reported within 48 hours of the previous Wet Parades and subsequent Lottery, and now several of those people have been found here in this flophouse, their bodies mutilated. 9 of the 16 missing persons are now accounted for, their far-dreaming eyes forever fixed on the last horror they saw in this world. Written in dried blood on the wall over one of the victims are the words, “Auril can not be denied.” The murderer has had a turn putting words in others’ mouths. Now it’s your turn to speak for them.

Session Length: 3-4 hours, and I only watch the clock when my players have a hard out.
Apply via this link: click me!!!
Payment: $20 per session, all handled through the startplaying.games website’s secure and proven Stripe Payment Processing.
Table Rules: Point buy or Standard Array and R.A.W., mostly just to eliminate confusion. I own all published core books, and character creation occurs through my DNDBeyond account which has content-sharing enabled with all players who’ve joined the campaign. All character creation options are valid except Tasha’s build your own race/class. I’m very open to homebrew, and if there’s a character you want to play that the current mechanics can’t help you realize, I’d love to work with you to bring that character to life. But players don’t just get to put their stat bumps wherever they want or slap darkvision on any race they please. The tyranny of fun matters. Finally, chaotic evil PCs are not allowed. Let’s try to spend three hours a week pretending to be something we’ll probably never actually get to be in real life: Heroes. It’s therapeutic.

About Me: I specialize in incorporating a player’s character concept and background into the story I run. Are you an escaped Thayan slave turned rogue? Perhaps you’ll bump into your old master somewhere down the line and exact a bit of revenge. Did you accidentally burn down the orphanage in Waterdeep in which you were raised, practicing your nascent sorcery? Maybe as you refine your evocation skills, you’ll be given the opportunity to make right this misdeed for which you’ve never forgiven yourself. As a young sailor, were you tossed overboard during a terrible storm off the Sword Coast? Mayhap in your new life as an accomplished fighter, you’ll reunite with the captain who had been more a father than an employer.

Some DMs are impartial referees. That’s true of me too, but only to an extent. I’m like an honest referee who was born in the team’s home town. I call things down the line, but I’m still rooting for the players. I may be the referee of this game, but I’m also the cheering fans. If I see a call that can go either way, I’m probably coming down on the side of the home team. Part of this is because I balance my combat scenarios toward the deadly side of things. My all time favorite sessions as a player are the ones in which I’ve thought, “Oh, man. We’re actually going to die,” but then we manage to scratch out a win. It’s pretty hard to actually kill players in 5e anyway, so I don’t pull my punches when I add monsters to the map. Expect stiff competition and cathartic victories. I try to avoid saying things like, “12, that just hits. Max damage though, you hit me for 11.” Rather, I try to hear the story the dice are telling, then express that story to my players. I’d rather take that roll above and instead say something like, “Your sword barely gets past the goblin’s shield, but when it does, bullseye. You plant the blade right in its heart, and its dead before it hits the ground.” I love roleplay, and I don’t see any reason RP has to stop when combat starts. I think players who aren’t into combat often don’t enjoy it because they’re used to scenes that play out less like their favorite films and more like listening to an IRS audit. I grew up on movies like Die Hard and Bad Boys and Point Break, and Spider-Man is one of my all-time favorite comic characters. I love when the hero finds time between punches to throw down a little cash money smack-talk on the bad guy.