Question: Behavior of invite link to a public game for non-logged in users

The question is though, should this behavior remain or in that case should it just redirect the user to the game url ? As I expect some users might be confused and just share the invitation link with players then complain why it asks them to login since they’ve set it to a Public game.

Alternative would be to have a notification at the top saying that they need to login to add the game to their games list, but since it’s a public game, they can also access it directly by clicking <here> and give the public url. This would probably solve everyone’s problem ?

I think that’s a good idea.
Click here to add to your list of games on the Forge
Create an account if they don’t have one
Skip all that and just go to the public game
Don’t put that part if the game is actually private

Maybe some clarification on the future potential benefits of a user account for a player is in order.

I don’t want to make undue assumptions, but I would think most players are only linked to one single game, which would most likely also be public, for the express purpose of not requiring an account for the players.

So this join link seems like an optional feature that does not need to be as prominent as it is now. Even if your initial goal was to pull more users in, few players will actually continue on to be a GM/DM.

So, to finally come upon a suggestion, without fully understanding the benefits of being a player, other than getting access to private games, why not simply make it less prominent.
This means: Move the invitation link below the privacy setting and have the explanation for public vs private be a bit more pronounced so their focus would fall upon it.

As for what the invitee sees once they go to the link, it should at least show some indication that they’re going to join the game their friend sent them. (This would also be nice for those chat programs that do link previews, at least give the name of the world, if nothing else.)
And maybe have 3 options: “Login”, “Register”, “Just go play, it’s a public world” - The last one only visible if it is indeed public.

I think that’s a good idea.
Click here to add to your list of games on the Forge
Create an account if they don’t have one
Skip all that and just go to the public game
Don’t put that part if the game is actually private

Ok, then it becomes an actual page rather than a redirect with a banner notification. I think that would work well, thanks.

@Alar the future potential benefits will be more visible with Story Teller tier. Think of Roll20, would you even imagine someone saying “why do I have to create an account on roll20 to be able to play a game on it?”, it just seems natural.
I’ve explained my plans for Story Teller here : Planned: Story Teller tier features and hopefully it gives you a better mental image of where I’m planning on taking the site in the future. With that in mind, you can hopefully understand why the invitation links and forge user accounts become important. Each Forge account would be associated with one player account in every game that the user was invited to and they get auto-logged in. The “/login” page of FVTT being completely overridden and the logging in being done transparently for them. Again, just like with Roll20, the DM sends a game invitaiton link, you open it, you have access to the game, you enter the game and you’re in, there’s no “second login screen” required.

Also because it would seem more familiar to veteran users of FVTT, but my purpose has always been a full integration and I expect most users would have their games set to Private anyway.

For references, I just tried to see what Roll20’s invite link does when one isn’t logged in and this is the result : 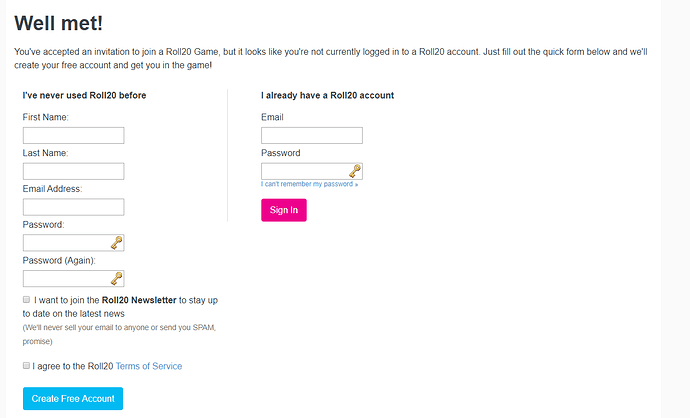 I read the plans now and see your point.

To be a contrarian for no good reason - you shouldn’t accept something as being natural just because R20 does it.
I find the current system for public games very sensible and so would others whose players are extremely lazy.

Nah, I don’t accept something as being natural being Roll20 does it. I’m actually forcing myself to try and do things differently from Roll20 because my mind automatically goes to their design (because it feels natural but also probably because it’s what I’m used to).
The current system for public games is sensible for users, they select their player and login. For DMs, it’s more complicated as they need to basically be editing the local FVTT database of users.
If I share a google doc, I give you an invite link, you open it, you need to login (presumably) and you can participate. I don’t get to enter a new username and password to assign to you and have you login again with the custom username/password that I created. That’s just a very bad user experience in my opinion, but obviously there’s no better solution when you are self hosted. But in the context of a singular database-driven hosting service, there is a better solution.
Regardless, for those who don’t want that kind of tight integration, and like the way FVTT works, that’s still going to be an option for them.

Edit: Note that the number of people on FVTT’s discord who complained about not figuring out how to ‘add players’ is usually high. People find it easy/doable now because they get used to it, but it’s not intuitive for most non-tech savvy people.

It is difficult to see the other side, it was very intuitive for me.
Also I’m fairly certain the passwords DMs use for their players are not up to snuff when it comes to security. So the player experience is actually simplified by lack of security.

Anyway, I see your point and that would indeed make more sense, but half of my players refused to make roll20 accounts because “Another account I have to keep track of? Forget it”, so others controlled their characters for them in R20.

We all have different experiences.

half of my players refused to make roll20 accounts because “Another account I have to keep track of? Forget it”, so others controlled their characters for them in R20.

LOL. That’s a bit extreme of them.
Hopefully when adding OAuth support to sign in using google/discord, it will make things easier for those people, but I had one player like that for when we decided to move to D&D Beyond and I just told him to stop being annoying and create an account already

The “lack” of security when using Foundry’s own login system (it’s not that it’s insecure, it’s just that passwords are plaintext and if someone finds a way to circumvent the login check, they could wipe your world. Foundry focuses on features, I want to focus my service on security as well) is another reason to use private games IMHO. But people still get the choice and that’s what matters.