I am happy to announce the immediate availability of new servers in Europe (based in Frankfurt instead of Amsterdam).
You will be able to switch to the new region by going to your Account page and clicking the “Change Region” button, selecting "Europe (Experimental new servers) and saving the change to your profile. 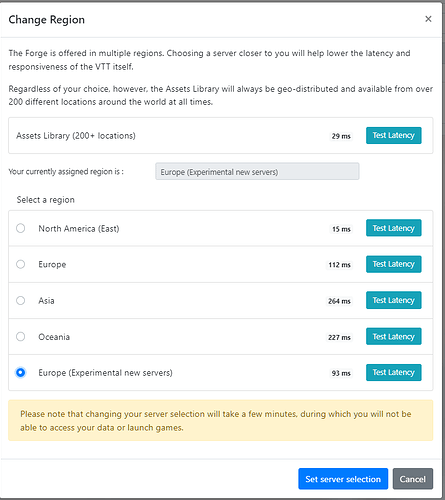 This new server setup is the culmination of nearly a year of brainstorming and design and we’ve been hard at work settings things up on the actual machines for the past 2 months, and I’m confident that it is now ready to be used by everyone!

These new servers are designed quite differently from our previous server design and they should be able to handle things more smoothly as they run on better hardware and have higher bandwidth allocation, and are optimized to provide a better user experience to everyone!
Ever since the issues we encountered a year ago, we’ve been hard at work continually improving the performance and getting rid of some of the issues and The Forge has become very stable in recent months, thanks to that effort, but we’ve always known that we needed to revamp our infrastructure in a massive way and change service providers, and this is finally it!

You will notice that the new region is marked as “Europe (Experimental new servers)”, and it sits alongside the old Amsterdam server region (marked as “Europe”). The reason the new region is marked as “Experimental” is simply because we’re not quite sure what kind of issues we might encounter as this is all very new, so we want to be extra careful with this. For the next 3 weeks, users can opt into trying the new servers and seeing how they perform for them. If something is amiss, you can still go back to the old Amsterdam region and let us know of your experience so we can fix things.
By next month, assuming everything is working as intended, we will move every user to the new region and remove the old servers, then we’ll begin working on also moving our North American region to this new infrastructure we’ve designed and to a new datacenter.

Another reason for marking it as Experimental for the moment is because, despite wanting to release this a month ago and be there to follow the progress and react to user feedback, we’ve only just managed to put the finishing touches today, while I’ll be travelling for the next few weeks and will be unavailable. I didn’t want to delay this release by another month, and we have someone on staff to handle any issues in my absence, but releasing this the day before I leave is a somewhat funny conundrum. By marking it as an Experimental region, we want to make sure everyone is aware that it’s an opt-in and that it’s not yet a guarantee that it will be stable or that, in the unlikely case of an issue, we might not be able to react and fix the problems as quickly as I’ve usually been able to in the past.
Finally, it is worth noting that the games on the new European region will be under the eu2.forge-vtt.com subdomain, but this is temporary only. Once we remove the old servers and move everyone to the new servers, the games will go back to being on the eu.forge-vtt.com domain.

That’s it! I hope this makes Europeans happy to see the new servers and you’ll be able to try it and provide us with some feedback on your experience.

Thank you,
Youness,
The Forge.