My World is Missing?!

Please tell me I’ve not just lost everything…

ETA: I’ve found the world in my “files to be deleted” Other tab. Not sure how to get those back.

This sounds extremely rare, or even impossible and a huge bug if it is the case.

To see if we can get your world back we would need to wait for @kakaroto though.

The issue was resolved over Discord. It looked like the world.json got corrupted by Foundry after they ran out of space, and I’ve replaced it with a new world.json to get it restored.

Hey, it looks like I am having a similar problem. Would I be able to get a rundown of how to update the world.json?

@kakaroto can you help out again?

Hey, it looks like I am having a similar problem. Would I be able to get a rundown of how to update the world.json?

I’m not seeing any issues with your world.json, and I just copied your tax'et world (that’s not a url-friendly folder name by the way), and it loaded just fine from my side, so there’s no corruption of any file that I can see.

Maybe that’s the problem I am having then. Any resources you can direct my way to change the world folder to being url friendly. I know I am probably missing something obvious here…

You can try to clone the world from https://forge-vtt.com/setup but like I said, I didn’t have any issues opening it from my side, so that doesn’t seem to be the problem. Can you show us a screenshot of exactly what you’re seeing ?

Currently launched Foundry world reads as none. When trying to import a world using the wizard, it reads that the world already exists. When deleting the current world and replacing it with the uploaded version, the currently launched world remains none

Have you tried stopping and starting your game? It might not have updated due to being idle.

Yeah, have stopped and started the game a couple times, no luck there.

The “currently launched world” will remain as None until the server is idled while a world is launched. In your case, it just means that when you launch the game, you’ll be in the Foundry setup page. This has nothing to do with whether or not the world exist.

Though when launching the game I am brought to a blank page with no way to choose the world. 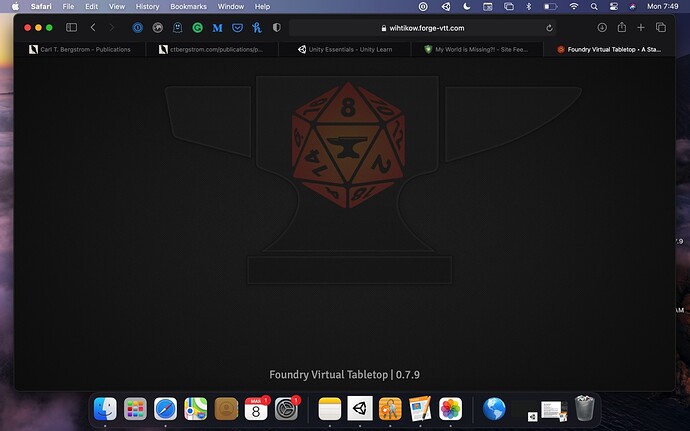 Safari is 100% unsupported by FoundryVTT. Use Chrome or Firefox.