Just joined the clan and signed up to the forge. I’ve uploaded my 5e world but each time get the following error telling me I have 3413 asset files missing. In addition I can no longer seem to enable my camera when in game. Any suggestions? Has anyone else experienced this when uploading for the first time? many thanks. 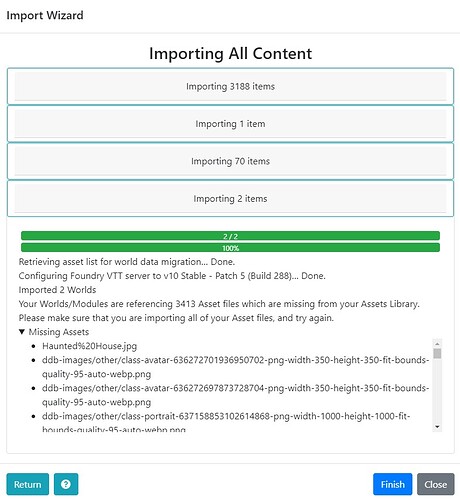 Please ignore…I had a local copy of foundry running with the game world. It happens at my age ;0)

Hey, as you can see from the list of missing assets, it looks like you have a missing folder ddb-images, which I expect has most of those missing assets. There’s also Haunted house.jpg missing. I would normally say that you need to import the entire Data folder so no folder is missing, but since I see it imported 70 modules and 2 worlds, I assume you already did that, so… maybe you had deleted (or moved) that ddb-images folder.
I don’t think having a local copy of Foundry running would have caused this specific issue, but it wouldn’t have helped the import of the world itself

Thanks for the reply. I did not realise I had a local copy of foundry running and the game world open when I tried to import the world. Closing the app and reimporting fixed the import issue as well as the camera issue. many thanks.

I still have one or two teething issues and will reach out on those seperately.