Game System:
DnD5e. Using Forge and Foundry. Discord for Voice. Camera is up to the players.

When do you play:
Sundays at 7pm EST for 3-4 hour sessions. 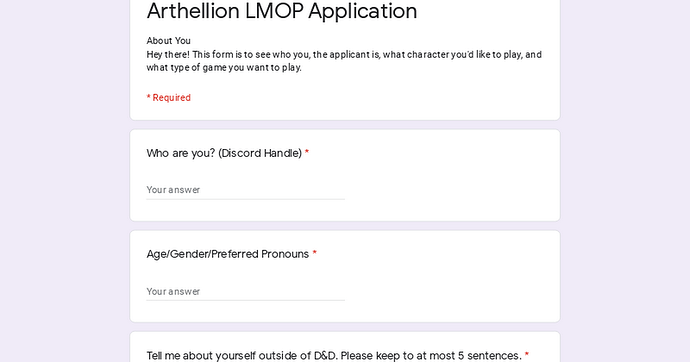 About You Hey there! This form is to see who you, the applicant is, what character you'd like to play, and what type of game you want to play.

Introduction
You are students of Neverwinter Academy where you have learned the basics of becoming adventurers. Now, it is time for your final test. The entrance to the Lost Mines of Phandelver have been rediscovered…and you are needed to escort a wagon of supplies through the dangerous roads to the city. But all is not as it seems…

Hello! I’m looking for between 4-6 players for the Lost Mines of Phandelver. LMOP is a great introductory campaign for those new to DnD 5e and falls into your traditional high fantasy storyline. It’d be about a 2-3 month campaign depending on your characters and would go from levels 1-5. Depending on how you like the characters we could potentially move forward with another module (I have several that I have run before such as Curse of Strahd/Out of the Abyss, but also have access to all the modules so whatever the party would like to consider) later, but this is a solid and great introductory campaign.

About Me/Philosophy
I’m a 28 year old male, located in the Eastern United States. I’ve been playing DnD for 10+ years and DMing for 3+. I love the game and love the stories that are created. I’m very much a story teller at heart and my favorite aspects of the game are the roleplay and social aspects of the game.

My goal as a DM is to create a fun experience for everyone. I don’t believe that this game is one where it is the players vs the DM or that it is my goal to make this as miserable as possible for you.I believe firmly that my goal is for all of us to have fun telling an engaging story together.

In that sense, I firmly believe that the ruleset exists as a tool for storytelling. The ruleset matters and we will strive for consistency, but at the same time, there may be changes made on occasion for your benefit.

I’m a strong believer in immersion and roleplay. I love combat, but it is the social and exploration pillars of DnD that keeps me playing the game. Striving for a high quality of roleplay and characters is important to me as a DM.

-Payment: Payment is $10 per session due 1hour before session start via paypal. I take it seriously that you are paying me for a session; this means I will consistently invest in providing a top quality session with animated maps, ambience, and high quality story-telling. Please note, that if players are willing, I’d have a rotation of players taking notes each session. If it is your week to take notes, session is free for you that week. This would be voluntary.

-Content of my campaigns are generally a PG13 rating.

-Keep Modern cursing/Language and Vulgarity to a minimum. We’re all adults, but the atmosphere for my games is to create immersion and roleplay. Excessive vulgarity and “penis humor” can break immersion. Definitely have fun and laugh/cut up, but we are striving for an immersive game.

-Once session begins, Everything said in voice, unless otherwise specified or if you are describing your character’s actions, is to be considered in character. If you want to make comments out of character, do so in discord. Note, if you have a question for the DM (Example: Can I make a religion check or what does this room look like?), begin your statement by saying, “Hey Arthellion, or simply Arthellion/Arth etc.” so that I know your pc is not literally asking another player or NPC, Can I make a religion check?"

-Sexual scenes are fade to black.

-If, at any point, scenes become potentially too graphic or triggering, please tell me and we will shift and transition to what is needed.

-Inspiration is given for excellent roleplay and artwork.

-If there is a concern over rules, I will make a decision at the time to keep the game going and moving. After the session, I will go back and do some research and communicate to the party the correct ruling or confirm my current one.

-Player absences: Real life happens and is important, but communication is key. Let me know if you’re going to miss. If it becomes excessive and detrimental, we’ll have to talk about whether you are able to keep playing.

-Material: No UA, Wildemount, or Homebrew. Characters are created in DnD beyond and ported to Forge.

-Feat variant rule is in play. You may choose ASI or feat. Lucky is banned.

-Upon completion of the Character Background document, you may select one feat at level 1 for your character.

-Injury: If your PC is at death’s door and has failed two death saves, you may, instead of rolling the final save, roll on the lingering injury table. You will stabilize, but you will have this injury.

-Requests for Homebrew Tweaks and such to your character are encouraged, but note this is dictated by character development and roleplay. I’m never going to give you something just because it’s more powerful, it’s a matter of, does this make sense in character for my PC?

-RE Spell Components: If you have a component pouch, you only need to have the components that have a gold cost attached to them.

-RE Rations: Subtract 1 Ration from your CS every day. If you go a day without eating, you gain a level of exhaustion

Additional Notes
If you have any questions, feel free to ask. Looking forward to hopefully running a great group with everyone.