"Games Configuration", "Assets Library" and "My World" pages are stuck on "Loading..."

This has been going on for a while and I haven’t been able to find a solution to it. This is happening on both Chrome and Firefox, I tried enabling/disabling Hardware Acceleration but it doesn’t work either way. It’s always stuck on “Loading…” 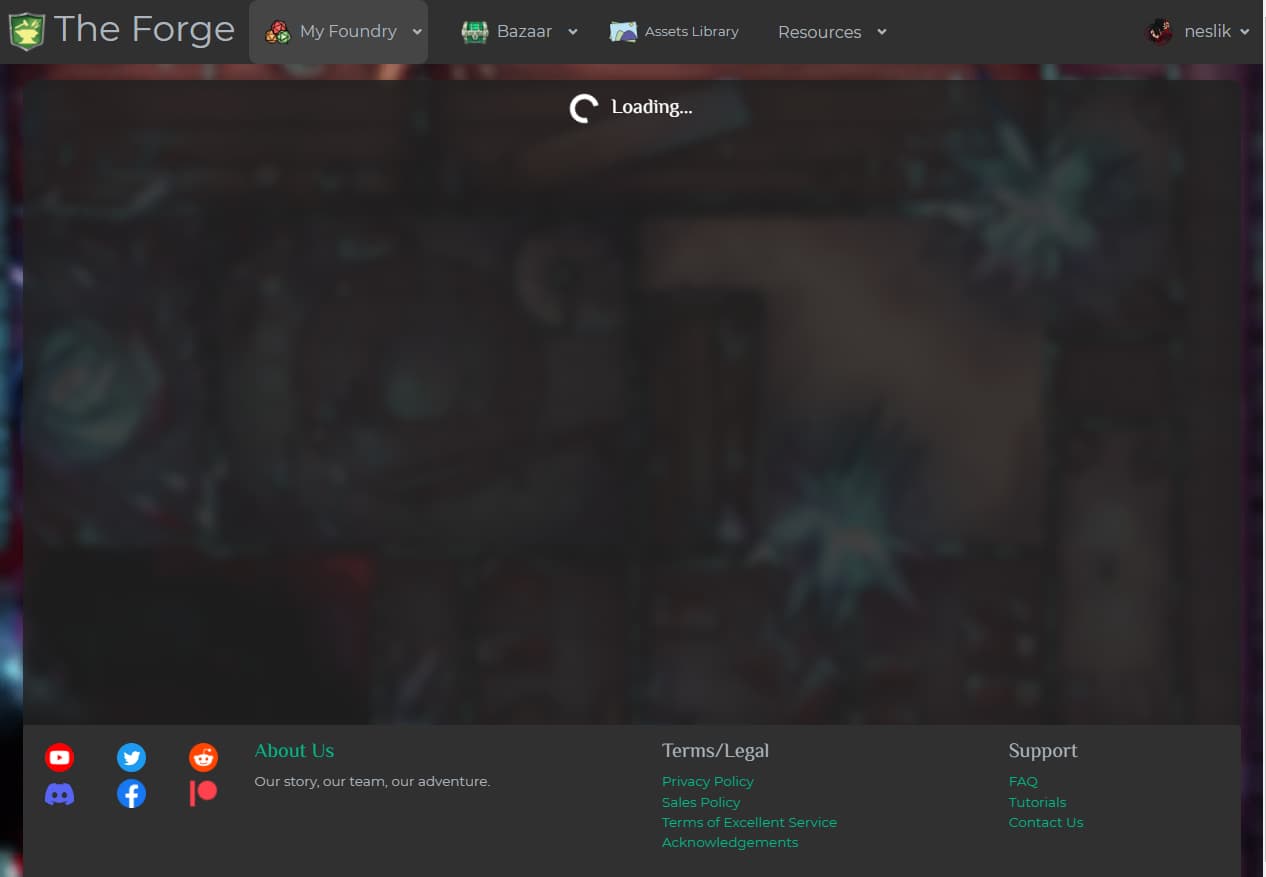 It’s not Foundry, Foundry works just fine, in fact we had sessions no problem while this problem was occurring, its something with Forge itself.

Any help is appreciated, thanks in advance.

Hi, That does indicate the Forge website itself not loading its content. I wonder if there’s some error that happens and blocks the page from loading. It could be due to an adblocker maybe that misbehaves (I believe I’ve seen a similar issue in the past where uninstalling and reinstalling adblock fixed it).
What would be helpful would be to press F12 to get the browser’s dev console, then in the ‘console’ tab, looking for any errors that might be appearing.
Thank you.

Opening the console reveals some errors, here they are. 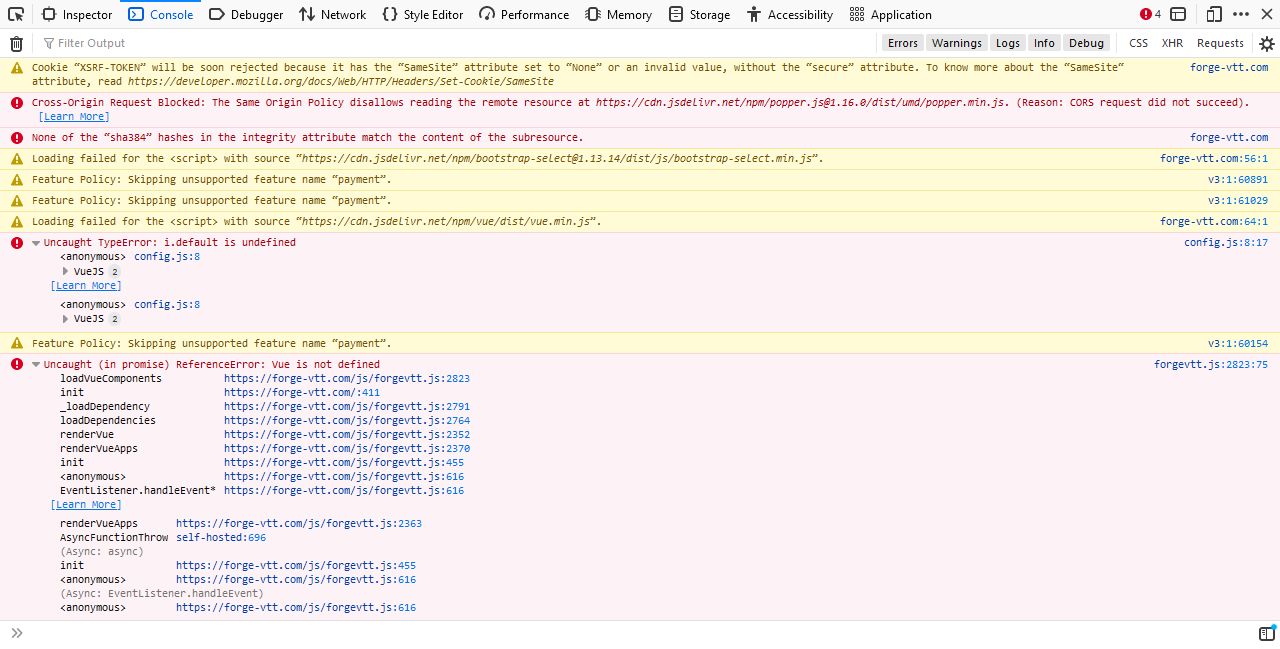 Don’t know what any of it means so I’ll just leave it here. I also just tried uninstalling my Ad blocker, but to no avail.

Edit: Also, I can access the rest of the website like my profile just fine, just the “Bazaar”, “My Foundry” and the “Asset Library” pages that aren’t working.

That looks like Firefox, can you try in Chrome to see if it works ?
It should of course work with Firefox, but I’m wondering if the problem is coming from something specific in your Firefox installation (an add-on for example) or something external to it (your router, or an antivirus or even a virus or something).
The reason it all fails is because some of the external dependencies that the site uses are not getting loaded. I can see multiple errors, each seemingly different… the first one about CORS (a cross site security measure) that should not exist in the case of loading that url, the second one is the “none of the hashes in the integrity attribute match the content” which seems to indicate that something modified the content as the data doesn’t match the expect hash (this is a security measure we use on the forge to prevent intercepts of the url and trying to inject malicious scripts in the page), and the final error I see is an error trying to load the actual Vue dependency.
Overall, something seems to be interfering with the content and causing it to fail.
I hope this helps you track down what is causing it.

Chrome doesn’t work either, I’m using Firefox because the problem started on Chrome. But here’s the console on Chrome anyways. 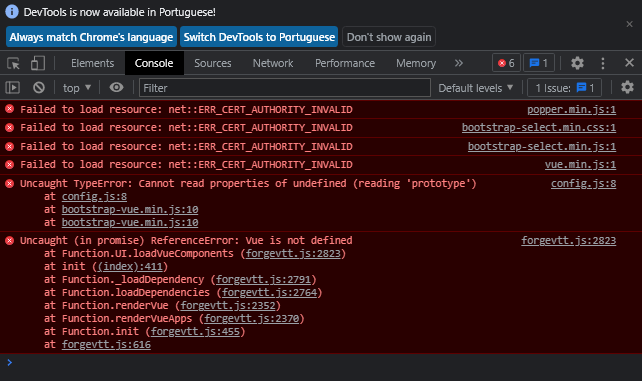 I’ll try and see if there’s anything interfering, but I don’t really have any extensions that aren’t ad block or anything similar, so I’ll try to see if its not some hidden setting in my computer.

Edit: Messed around with disabling all my extensions, deleting cookies, the whole shebang and it didn’t seem to work. I even installed a different Browser and still no luck. I don’t have any antivirus that could be messing with the website other than Windows Defender I guess? But I don’t think that could be it since it was working a while ago.

Thank you for that. I can see the error more clearly in Chrome, which is ERR_CERT_AUTHORITY_INVALID.
That seems to indicate that your PC does not recognize the HTTPS encryption certificate from those external websites, and that’s what’s causing the issue.
Can you open this link on its own : https://cdn.jsdelivr.net/npm/vue/dist/vue.min.js and not see any errors?

It might be something about your system not having correct certificates installed (If on linux, do you have ca-certificates installed, or in Windows, does it have any pending windows update?), it could also be that your computer’s date is not set properly. I’ve also seen reports of people having that domain blocked in their router, if they are using an office network, or VPN and it gets blocked.
I hope this helps you figure out what might be causing the issue from your side. Let us know if you have any more information or need more help.

Accesing the link gives me an error, more specifically it says “NET::ERR_CERT_AUTHORITY_INVALID”. I updated Windows (much to my dismay) and still no luck.

However! I have found a workaround. Using OperaGX and going into incognito mode and using the browser’s VPN allows me to connect and use it just fine for some reason, that leads me to believe it might be something with my router which bewilders me even more.

I could spend more time trying to find a proper fix, but this will suffice for now. Thank you for your help!

I’m glad you got it working again! I know we had some issues on the Beyond20 discord who couldn’t access the Beyond20 website because their ISP was blocking it for some unknown reason, and the easy fix was to change their router/computer’s DNS to google’s (8.8.8.8) or Cloudflare’s (1.1.1.1) and that fixed the problem. I would suggest you try the same thing as that might be it.