Documentation Getting Started With The Forge
FAQ, release-channels, Tutorial, feature
DestinyGrey January 6, 2022, 1:17am #1

Updates and Versioning on Foundry VTT

Foundry VTT goes into more detail on their versioning here. A full list of their releases and release notes can be found here.

On The Forge, you can set your games to launch a specific Foundry version, or to use our Automatic updates channels.

Forge release channels are a distinct feature of our service. In effect, they’re a way of notifying users when a new update is available based on their preferences. When your game is set to one of these release channels, you will be notified in-game of new releases available and you will be given the choice of upgrading your games or staying on your current Foundry release. 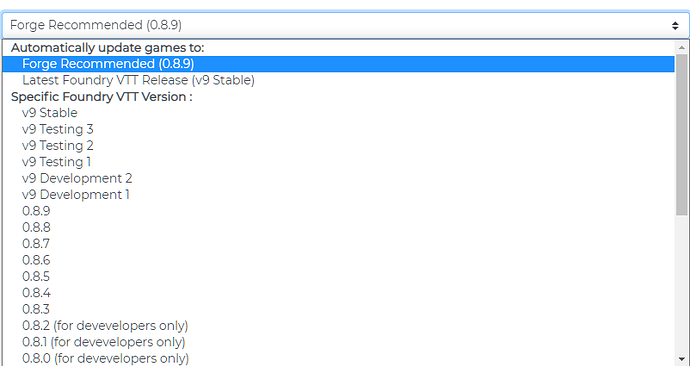 When a user is on a release channel, they will receive a notification whenever The Forge adds a new version to that release channel. This indicates that a version of Foundry VTT is at their preferred level of stability.

Users can click on this notification to be brought to the update page, and choose to update their games/server to that new version. Users also have the option to stay on their current version semi-permanently, until they choose to manually upgrade later. 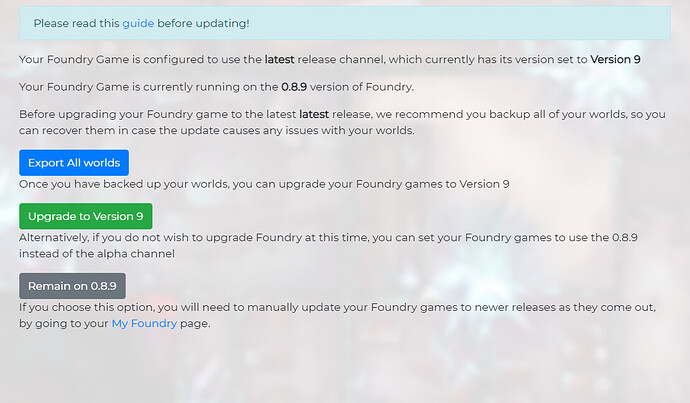 Users on a release channel will continue to be prompted to update whenever they enter their game, until they have chosen to stay on their current version, or proceed with the update.

What is the difference between the various versions ?

We understand that our “release channels” can feel a little confusing sometimes. We explain each release channel in detail below.

When Foundry VTT releases a new stable version, The Forge takes the time to test these new releases before moving them into our recommended release channel. First, we verify that the version will work on The Forge, and make changes to our service if they will not.

The Forge will only release versions that Foundry VTT marks as “stable” in this channel- versions marked as “prototype”, “developmental”, and “testing” will be released in other channels. In this sense, users can be reassured that by using the recommended release channel, they will always receive the most stable experience possible.

The latest release channel will notify a user of the latest stable, or slightly-unstable version of Foundry VTT. This means versions of Foundry VTT that are released as “testing” versions, or “stable” versions that may not immediately work right on The Forge.

Module and system compatibility is not a given for the latest release channel, given that these versions tend to be newer.

Basically, the latest release channel is handy for Foundry power users that:

Because of these concerns, users must opt-in manually to this release channel.

The Forge will eventually retire specific versions of Foundry VTT on its service over security concerns, or lack of viability in supporting the version any further. If that specific version is retired, the user will be prompted to update to a newer, supported version of Foundry VTT.
That said, we always strongly recommend that our users update to the latest recommended version, in order to stay up to date with security fixes and performance improvements.