Hi everyone,
I’m new to the forge and trying to move to it from my local machine.
I have uploaded almost everything without issues except my world. In the step after the generating step the progress bar goes red and the page returns: “Error importing world : Error 0”.
This appears both when uploading straight from the Foundry folder and when uploading a zip file. The world works fine on Foundry itself.

I’m uploading a screenshot of the console for comparison. The “missing assets” mentioned were originally in the Data folder and imported before, but even after copying them into world folder the error remains. 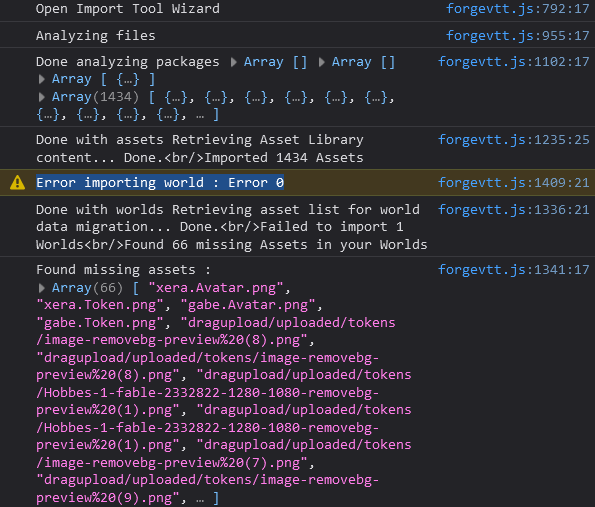 Would really appreciate help with this!

Do you have your local FoundryVTT App completely closed out when you try the import?

Yes, completely closed, not even started since the last reboot. And even as zipped version it doesn’t work.

How big is that zip? I ask because it might be that you have PDFs or some large files in the World directory interfering with the import.

536 MB, I have not added any pdfs myself to this world

Humm… I think the “Error 0” error means that the upload failed, and so far, that’s always been because of some left over file causing the world to be extremely large in size.
We really need to make that work a bit better, and show a more user friendly error message, and it’s planned for when we rewrite the import wizard UI.

Can you take a screenshot of the files in your world’s zip ? I would expect that there would be a world.json file, a scenes folder with some small thumbnail images, and a data folder with .db files in it. Any other file that you find in your world, should be a png, jpg, mp3, or mp4. Any non-media file would cause it to be included in the uploaded and if it’s causing the upload to be too large, it gets rejected for security reasons.
Like Aeristoka suggested, look for pdf files, but also a zip file inside the world folder itself, or .dd2vt (dungeon draft) files that might be stored alongside the maps, etc…
I hope that helps. If you still can’t, could you upload your zip file somewhere and send me in private a link to it, and I’ll see if I can reproduce the problem, and hopefully find/fix the issue.
Thanks, and sorry about this unfortunate user experience.

That was it! I still had some dd2vtt files in there. Now it works!
And I would really appreciate a way hint at the cause, error 0 left me clueless v.v

Either way: thanks both!

Awesome, glad you got it working now. And yes, “Error 0” is a very bad way to tell the user that an error occured (it shouldn’t say that but that’s a bug) and having the import wizard even smarter so it can avoid those issues is on our TODO list.