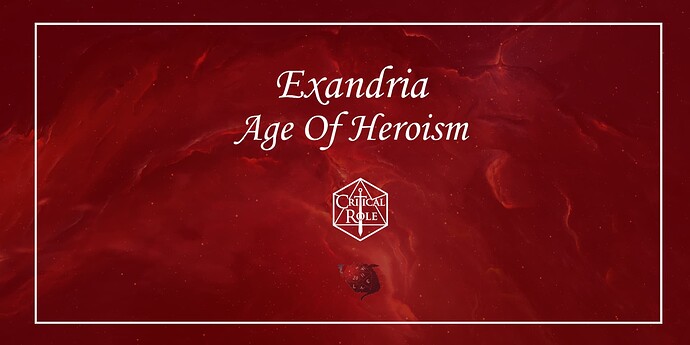 When do We Play?
We play every other Friday, for example in the week of this posting the 19th of august we are having a game

Description of Game and Preferred Play-style
Exandria Age of Heroism, is a game that mostly takes place on the continent of Wildmount, Focusing on a group of individuals brought together through various wild means, The Party currently has no overarching goal, as the progression of the game is slower then most due to the scheduling. As for the style of player I’d like to recruit, i would prefer someone out-going as my party is lacking a definitive voice and someone with the skillset to bring out the RP in others, im currently Looking for 1 players but if an application is good, i may consider inviting two.

Additional Details:
We’re of course using forge to host the game, and all of my maps are hand-made on Dungeondraft, an application should include a Age, Preferred Pronouns, character concept, your favorite moment of RP in the 5e System and a discord so that i may contact you (Example Below)

RP Moment - I punched a guy once

My character was having visions of an eldritch monster and I somewhat stood up to it and tried to fight for my body but at the end it still took hold but holy fuck was that intense.

RP Moment - This one time I walked into a dungeon while the party members were planning something (we got separated) and ended up chatting with a Mind Flayer and a Beholder (the Mind Flayer wasn’t so interested in eating my brain because I was a Warforged), providing the distraction my teammates were looking for.

Character Concept - I always wanted to play a Lycan blood hunter, an old human who deals with hunting monsters on his own but still enjoys the small pleasures in life. But he’s scared that someday he might hurt someone that’s why he tends to be alone, especially near the full moon.
It might not be much but if I get the chance I would love to expand it or hear some feedback.

I know I’m a good bit late, but thought I’d see if you were still looking for another player. Just in case.

RP Moment - My gm at the time had planned a basic random encounter as a hobgoblin ambush. My character and the rogue were playing chicken with the deck of many things (I didn’t know what it did, he did) I drew the Avatar of Death. Just ran away from it after casting invisibility (It has truesight), I ran straight into the hobgoblin ambush, reaper chased me. Hobgoblins jump out and ambush the reaper because they can’t see me, only for it to multiply and decimate the hobgoblins. Group arrives a few rounds later to see both the hobgoblins and my wizard bleeding out on the floor. I rerolled into a cleric.

Character Concept
Race: Autognome from Spelljammer source book (But made of wood instead of metal to fit the character theme)
Class: Druid
Subclass: Circle of Dreams

Created by the greatest druids of the circle they were indoctrinated into, and built from hardy wood and vine while bestowed the magic of life in many ways, each druid that assisting in their creation sharing with the construct a part of themselves, resilient to most general wear and tear, the construct was given the purpose of caring for the circle eternally, even as others died around them from age or injury.

Eventually, a war levelled the circle’s small abode, killing all in its wake. Leaving the construct alone and weakened, leaving it to rebuild what was lost and to continue its duty of providing care to those around them. But with no-one to care for, all that remained would be the place in which it soon began to rebuild from the ground up.

Hope to hear from you soon?

Is this still open? What time would it be on Friday?

RP Moment: as a forever Dm I never had an rp moment as a player but I had a cool moment with my players once, they were moving through a traped corridor and they almost failed every saving throw so the got shot, poisened , hogtied and set ablaze, and all that didn’t stop the partys warlock from opening an unchecked door that led out of the dungeon leading to an explosion that sent his right hand flying to the other side of the room.

Character concept: I’d like to play a paladin who is torn between the concept of justice and worth of a man’s life which leads him on a dark path that makes him break his oath and join hands with a patron that promissed him an answer by making him journey around to fulfill something for him so in essence a multiclass warlock-paladin oathbreaker as for the race I’d prefer a yuan-ti cuz their uncaring nature always makes me exited to play one which leads to your request of someone fulfilling rp ‘‘as a charisma based class’’ I can be a good face for the party and make good work at establishing connections for them while fighting the urge to eat them alive as a yaun-ti lol.

Hey there! I’m Ells/Eliza <3 Happy to make your acquaintance

RP Moment - I play in a monthly game as a Triton Warlock who currently is in an alternate version of my DM’s Barovia (named Sanguinia); playing him as somewhat hostage to his aboleth patron’s pact has been immensely fun, especially so alongside the character’s love interest (the DM’s version of Ismark), leading to some very honest, sombre and sobre RP to mix in well with the game’s combat.

Character Concept -
Char Name; Vyria Richter
Race: Air Genasi (the new one, not the legacy one

A daughter of two well known composers, Vyria has always held herself with grace and was in many senses of the word, a perfect golden child stereotype. She went through her day-to-day life composing works that many found beautiful but to her, rang hollow; surely, there was more to life than such flat composition, a deluge so two dimensional to her own ears that she could hardly call it music?

So she set her eyes upon something greater; the music that weaved together the very fabric of creation. Her pieces changed from elegance into a horrifying step-to of manifesting objects and moving pieces, furniture around her beginning to shuffle and shift into a danse macabre of lifelike imitation. Vyria was overjoyed, and yet, still seeks more even to this day. After all, creation lies just out of reach as she still asks herself; what, is that melody???

I designed this character as an explorative parallel into the character archetype of Sigma, from overwatch. A somewhat genius intellect grasping for that which lays just beyond the realm of their understanding (something I hope can provide interest to your group).

<3 Hmu if you liked it, or would like me to join

Check your DM’s for more information!

Check your DM’s for more information!