For some time I’ve run a campaign using the Jitsi module. My friend has now started his campaign through his own account. Jitsi worked fine for the first couple of sessions and has now suddenly just stopped working.

We’ve switched to the inbuilt A/V but it’s persistently cutting connection and video drop offs. Individually having to reload the web page to see anyone again.

Is anyone else having these issues or know how to resolve them? Or do we need to switch to livekit?

How many players do you have? AFAIK, last December, Jitsi restricted the number of people in meetings, using the service accessed by the plugin, to five. Your best bet is to switch to Discord or, if you’re comfortable configuring servers, switching to the LiveKit plugin.

Yes, we are having the exact same issue with the inbuilt A/V, it is not fit for purpose. Jitsi just seemed to work for all five of us, but now that’s gone, we’ve had to switch to Discord on the phones - and I hate Discord, it is a layman’s nightmare. I guess you could do a group Whatsapp?
For Livekit to work you either have to be able to do lots of programming and setting up of your own server/thing???, or pay out on the guys Patreon, and let him do it.

I thought Forge were looking into it, and sorting it out. Main reason I’m with the Forge, was for the A/V.
Thanks

Thanks to you both.

It’s a real shame, I’d say A/V is probably the most important element and it doesn’t function well at all. If anyone has a link to the devs addressing this issue I’d like to know their thoughts and plans.

For now we will likely use Discord A/V but not much fun if you don’t use two screens.

Discord is manageable without two screens if you use its video pop-out feature. That way, you can position video below, above, or beside your VTT. See the two screenshots. 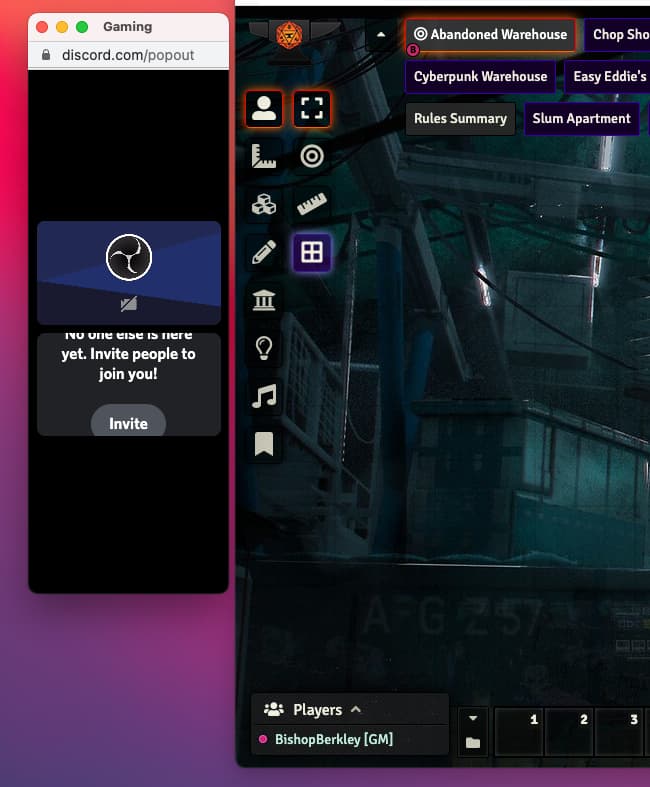 My friends laptop is quite poor and so will discord on his phone. The rest of us will use your solution for now.

I personally like to use Discord for Audio, and video-only in Foundry, so that if video doesn’t work for some player, it’s not a big deal since audio is the most important, and also if you refresh the page, you don’t suddenly lose audio with the other players, so separating audio only into Discord is great, and having the videos embedded in Foundry is also better than using the discord popout.

I set up my Livekit server on AWS (for free one year) and I have to say it was quite the effort, but it’s achievable if you have the time. On the other hand the Patreon option is very reasonably priced if you consider the cost per month of having your own server for an unlimited time.

I also find myself in the situation of needing the A/V in Foundry. I had just subscribed to The Forge because I thought I had it integrated somehow but from what I’m reading it doesn’t work.

It works, it is just foundry native that have issues.
You can still enable A/V and play as normal.